Politically, Ireland is divided between the Republic of Ireland, which covers five-sixths of the island, and Northern Ireland, a part of theUnited Kingdom, which covers the remaining area and is located in the north-east of the island. The population of Ireland is approximately 6.4 million. Just under 4.6 million live in the Republic of Ireland and just over 1.8 million live in Northern Ireland.

The island's geography comprises relatively low-lying mountains surrounding a central plain, with several navigable rivers extending inland. The island has lush vegetation, a product of its mild but changeable oceanic climate, which avoidsextremes in temperature. Thick woodlands covered the island until medieval times. Today, the amount of land that is 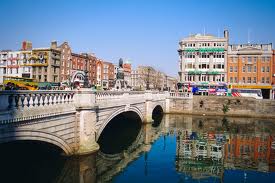 forested in Ireland is just one third of the European average of 35%.There are twenty-six extant mammal species native to Ireland.

Irish culture has had a significant influence on other cultures, especially in the fields of literature and, to a lesser degree, science and education. Alongside mainstream Western culture, a strong indigenous culture exists, as expressed for example through Gaelic games, Irish music, and the Irish language. The culture of the island has also many features shared with Great Britain, including theEnglish language, and sports such as association football, rugby, horse racing and golf.